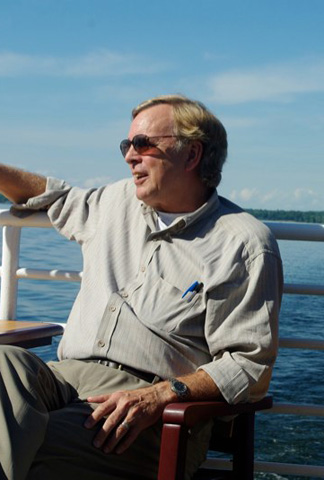 Listen to Peter talk about how CCV started.

CCV: In the beginning

We were at the New Careers conference in Stowe, spring, 1970.  And it became apparent quickly that there was a barrier between the needs of poor local learners in rural Vermont, like Head Start mothers, and any organized higher education. We agreed to write a grant to OEO and same was done, asking for $65,000 to conduct a study for a rural, community-based, community college that would take education to the learner, meet the learners’ needs, and do so with existing resources.

Lo and behold the grant came through in the fall of 1970 and the search for a Director began. I was on the planning group and kept arguing that, if we looked for a traditional approach to the task, we would get the same thing and would fail; because the traditional campus-based model wouldn’t work in rural Vermont.

At some point, one of the other team members said, “if you are so clear about this, why don’t you do it?”. So, at age 24+, and with very little experience behind me, I jumped in. I got the job and in retrospect, I think I was actually the best candidate which gives some sense of the pool. I quickly hired my top competition, John Chater, a community organizer from Cabot, and we launched.

Initial research showed quickly that there were no operating models of a community-based community college that used the existing human, physical, and programmatic resources of the community to meet learners needs. So, with the commission’s approval, we chose to simply go get some learners and begin. If there were no examples, we had to create one.  And that is how and why we enrolled our first students in the late fall, early winter of 1970-71, some in Barton at the Parent Child Center and some in east Montpelier, at the newly opened U-32 High School.

This was a major tactical coup, as it turned out, because we began to create a Political constituency that a study never would have achieved. Also, at that point we were half way through the grant year and needed to get something done. We were tuition free, had an unpaid faculty, and were using community spaces.

Now it becomes a little more complex. So let me address themes as they unfolded:  funding, expansion, staff, threats, the development of the academic approach, and the merger with the VSC.

I am a little hazy on the exact dates, but between 1971 and the year we Got our first state funding (1975, I think) we raised another $270K from OEO, $750k from FIPSE, $120k from the Carnegie Corp., and approximately $2m from the Kellogg Foundation. This money allowed us to grow and expand without the approval of any state agency or the legislature.

We sent a team to southeast Vermont (Tom Yahn, 1st director, is still in Brattleboro) in 1971 and to Lamoille and Franklin (Peggy Williams) in either 72 or 73. The thinking in all cases, was to go into parts of the state that were either unserved or totally underserved to avoid the politics of competition. The exceptions were Lamoille county, where Johnson State (because of Bill Craig and his successor, Ed Elmendorf (at AASCU in DC) were our friends. Our office there was on the JSC campus. Also, Caledonia County and Lyndon State where Lyndon State operated, they were hostile from day one. But the Northeast a kingdom was the poster child for poverty and remote rural isolation in Vermont, and we had to be in all three counties with offices in Hardwick, St. Johnsbury, and Newport.  With these sites in play, the initial shape of what was to become CCV was set and stayed the same through the end of my presidency.

Inevitably I will forget a few important people. But we were blessed with an extraordinary group of people across the college in these early years. And , as an aside, I can say that the influence that Tim Pitkin, recently retired President of Goddard, had as well as the Goddard Low residency program (GEPFE) were instrumental in informing our approaches to learning and assessment.

In the central office, Dot Hanna kept the books and I am sure that is one reason why we raised money. Funders had confidence that she wore the boots and would protect the money. She has passed, but her sister, Julia Northrup is still alive in Underhill. Other critical people were Ken Hood, Larry Daloz, Steve Hochschild, Dick Eisele, and Mary Wade.

John Holden (former commissioner of education who advised us), and later on Myrna Miller who brought professional grade assessment expertise to the college. The current chancellor, Tim Donovan, literally worked every position at the college, beginning at age 26 or so, and became a pillar of its later development.

Other than the continual search for dollars in the run up to state approval, and the general astonishment among many establishment people and educators that what we were doing was not higher education which led to constant harassment and attacks, There were three sources of threat through the first four-to-six years: University of Vermont College of Continuing Education, Lyndon State ( and more passively the other VSC), and private higher education in Vt.  UVMCE wanted our market, the other VSC wanted our money (federal and state), and the privates wanted us gone because they thought we were low quality. I can elaborate more on this if and when it is important. But the high point was a meeting with Gov. Salmon and UVM administrators in the governor’s office in which he warned them off a strategy that would have put us out of business. Luckily, I saw it for what it was, and we were able to stop it.  This was another completely fortuitous event.  If it were a different governor, it would have been a different outcome in all likelihood. Also, Graham Newell, a Lyndon State professor, had drafted the VSC authorizing legislation and chaired the Senate education committee. He was an ardent and persistent foe.

Development of the Academic Approach

Until the FIPSE and CAEL connections developed, we were flying by our own compass. We were outcomes -based because we know that without the traditional input measures — campus, faculty, library, etc.–we had to show results. The outside money bought us the time to get minimally good at this as well as the assessment of prior experiential learning that we could make the case. We were community-based so we drew on the brains of the community to structure our programs. etc.

Merger with the VSC and State Funding

A clever tactic embedded in a larger strategy.

In the meantime, I had made liaison with a lot of the Agricultural Extension group, Bob Davidson at UVM and State Sen. Keith Wallace from Waterbury. So we had great support from some traditional sources.

There were three affiliations that made a huge difference for us.