I interviewed for and was hired as a Coordinator of Instruction and Advisement with CCV St. Albans in August 1991.  At the time, the site was located at 81 North Main St., the current home of Howard’s Flower Shop.   The building was similar to many other CCV sites in use in that era—downtown location, very limited parking, cramped for space and in our case, few windows which made for a dark interior with an environment that was cold in the winter and really hot in the summer. 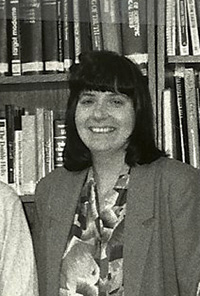 There was a tiny reception area where the secretary-receptionist worked, a small office for the office manager and two crowded classrooms on the first floor along with a miniscule room with a few computers (aka-the computer lab).  A steep and enclosed staircase lead to the upstairs where there was a maze-like corridor that eventually revealed six irregularly sized offices for the remaining staff.  I was hired into a new position as a fourth coordinator and assigned to a long and narrow office that looked out on Main Street.  It was just big enough for a desk, a chair and a visitor’s chair. But it did have a lot of shelving built on the walls.   About a month later I found out that my office had a previous life as a book storage closet and was quickly clean out and repurposed as an office before I was hired.

Parking for the staff was in the alley of the building that could fit maybe four cars.   This involved a delicate car ballet around staff arrival and departure schedules.  As all of the parking was metered in downtown St. Albans at that time, I chose to park a few blocks away, up a hill so I managed to get in a nice walk each morning.  A walk that was sometimes not so nice in the winter.

The lack of interior space meant that we were limited in what functions could occur at the building (none really), what equipment could be in the classrooms (not much) and how many students could be in the classrooms (I think 12 was the maximum for one room and maybe 8 for the other?).  I don’t recall much being accessible via our current ADA standards, but I do remember staff moving a small wooden ramp in and out of the front door area when we expected a visitor who might not have been able to make the step into the building.

Dawn of a New Era

I didn’t realize at the time I joined CCV, but I had the incredible good fortune to be part of a new era for the College.  Within a year or so, each and every staff member had a desktop computer and, more exciting for the St. Albans site, a new building was being planned!  This wasn’t a move to another storefront building along the downtown row, but rather a new building, built by James Warner, a local developer, specifically as an educational site for CCV.  I believe that Mike Holland was still the President and Tim Donovan had recently been assigned to a new position heading up technology, and then eventually facilities.  CCV was beginning a growth phase and St. Albans was to occupy the very first building custom built for the College.

David Buchdahl, the Regional Director at the time and the site staff (Mary Ellen Lowe, Judy Putnam, Kathi Rousselle, Penny Lynch, Dian Ulner, Janet Dooley and myself) were all involved in the planning and layout of the one story, 10,000 square foot building.  Located at 142 S. Main Street, the building was to have plenty of office space (each with a window), five classrooms (including a computer lab and arts/science room), a combined library and study space, student lounge (with vending machines) and an instructor room.  And central air-conditioning.  But best of all, were two amenities that incredibly improved our working lives—a kitchen and a sizeable parking lot!

I believe the new building did much to contribute to the site’s growth since we could offer more daytime courses, we were fully accessible to students and we became much more visible in the community.  Most importantly, I think our new and up-to-date space sent the message that CCV was a growing and thriving institution and our students deserved to learn in a modern and technically connected environment.  The site became a showplace for a few years; in fact I recall that we even hosted a Vermont State Colleges Board of Trustees meeting.

Since then of course, CCV has improved its facilities in all locations beyond our wildest 1991 dreams!  Even though I left CCV for a position at UVM in 1999, I was so pleased to attend the dedication of the beautiful, functional and enormous CCV Winooski building in 2010.  It clearly sends that message that CCV has arrived as an institution.

I recall as a coordinator, a new student once told me that she’d like to take a few CCV courses and then someday attend college.  My response to her: “We are a college!”  There is no doubt that CCV  now  clearly sends the message not just through facilities but by its publications, programs and people that it is indeed a college and one that garners a great deal of respect from the Vermont community.  I’m proud to have been a part of CCV and still marvel at the dynamic and thriving culture of the organization and the success of its students, faculty and staff.