My journey back through CCV history, my, where do I start?  First, I have to confess that the journey started with Vermont State Colleges starting in April, 1985 at Castleton State College.  In August, 1997, I applied at CCV for the position of financial aid counselor and was hired for the position.  At that time, Barbara Murphy was president at CCV and today she is the president of JSC.  Bette Matkowski was my Regional Director, who today is retired after being president of Lamar Community College, Colorado, then Johnson and Wales University, Denver.  Shortly after starting, Tim Donovan became my new Regional Director, who today is the Chancellor of VSC.  What does this all mean?  Working at CCV opened the doors for many who were eager to ask, “I wonder” questions.  If you had an idea, the motto was run with it until you were tackled!

At the time I was hired, I was “assigned” a mentor who I found interesting.  At CSC, I had a mentor but one of my choosing.  My assigned mentor was John Sweeney, who not only showed me the ropes of financial aid, but to this day is one of my greatest friends.  He was there to not only teach me financial aid regulations, but to be my sounding board as I moved my career forward. 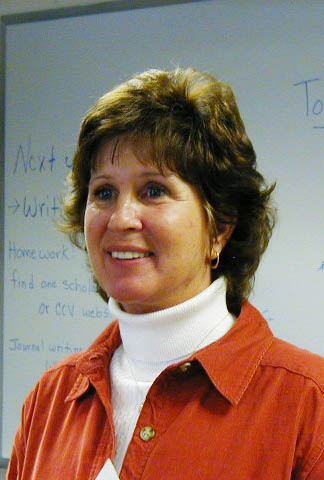 In 2003, I was appointed to the High School Committee which would later become my passion.  The appointment was the beginning of my involvement with the class, “Introduction to College Studies”.  This class was offered free to high school students to learn the skills needed to become successful in college.  Students completing the course at that time could apply for a scholarship to take a free class at CCV.  The scholarship was given out to only several students due to funding.  Today, this class continues to be offered, but now all students completing the course can not only take a free class at CCV, but they can take the college class at any of the VSC colleges.  Years of developing partnerships has enabled this class to be a great success for CCV.

I remember the day that I was asked to teach ICS (I kept asking “I wonder what it would be like to actually teach this class!), was a defining moment for me.  I could work all day at CCV, but at the end of the day when I walked into the classroom was like I had a new life.  I did not start my college career until I was 35 due to the fact I had no one to help me through the process.  At 18, for many of us girls, the choice was either go to college to become a teacher, nurse, or get married.  While I was accepted into nursing, I was so scared of going to college, leaving home and figuring out what I needed, I declined and got married.  The day I started teaching, I made a promise that every student I taught, I would make sure they knew the resources available to them to help with these difficult decisions.  Even in retirement I get calls from friends who have friends who have someone needing help with a college issue.

My second passion at CCV was working with TRIO.  I remember almost begging for a chance to be a TRIO advisor and I think I even promised I would stay 5 years in that position!  Working with TRIO students was extremely rewarding as I watched them work through difficult situations to finally walking across the stage to receive their diplomas.

I think one of the most defining moments at CCV was when the college was about to begin major changes in how we did everything.  We were growing and needed to make changes.  At that time, every site received a copy of “Who Moved My Cheese” and we were asked to read it.  Change is hard and those who resisted were unhappy, and for some, this met leaving CCV.   For those of us who dared asked “I wonder……..” were excited and met the new challenges.  New adventures came to us and still today, I keep this card that was given to each of us just to remind me that no matter what stage in life I am at, I need to keep reading this little card:

The Handwriting on the Wall

They Keep Moving the Cheese

Get Ready for the Cheese to Move

So You Know When It is Getting Old

The Quicker You Let Go of Old Cheese,

The Sooner You Can Enjoy the New Cheese

Move with the Cheese

And the Taste of New Cheese!

Be Ready to Quickly

The Keep Moving the Cheese

From Who Moved My Cheese? By Spencer Johnson

CCV gives those who want to expand their careers and interest every possible support needed.  I remember once being told that as a supervisor/leader, you judge your success by the success of the people you lead.