With A Little Help From Our Friends

There is a fire burning not far from my home in Prescott, Arizona and the prospects for near-by homes are not very good.  Ironically, it is a reminder that once it was ice, not fire, that provided the challenges to life and limb in the fair state of Vermont. 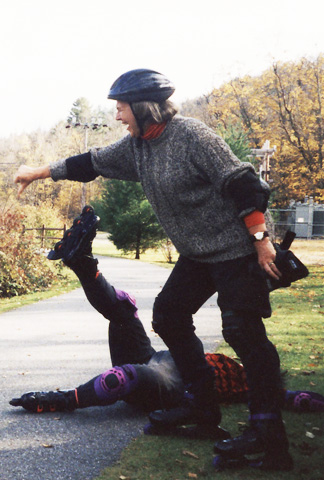 Some say the world will end in fire,
Some say in ice.
From what I’ve tasted of desire
I hold with those who favor fire.
But if it had to perish twice,
I think I know enough of hate
To say that for destruction ice
Is also great
And would suffice.

With a nod to Robert Frost
“Fire And Ice”

When I joined the staff as a Coordinator of Instruction in Brattleboro in 1976,there was, indeed, an icy chill in the air when it came to Considering Community College of Vermont a legitimate college. For one, the College provided no library and research service to students and instructors.  Instructional sites were far from each other and during a typical Vermont winter, it was virtually impossible to share information resources in a timely manner. No internet, no e-mail, no databases, but most of all no cooperative agreements with college libraries in the state to provide all Vermont students  access to information sources on an equal basis.  The challenge:  get it together, get people to talk and plan, just get going.  Build a state library network.

“How does a campus-free college, which is spread all over the state of Vermont, provide its students with library services? To a large extent, it’s done with wires.” (Dennis Lindberg, Addison County Independent, March 11, 1987) The planning for a state-wide automated library system had begun in 1982 when a system-wide assessment group was assembled by the Vermont State Colleges Chancellor to conduct a detailed assessment of Vermont State College library and information services.  How to provide library services to CCV was one of the driving forces in this joint planning project. Membership consisted of representatives from each of the five state colleges, and the assessment process took into consideration the quality and quantity of collections as well as ratings of how they supported each college’s general education program.

The assessment took nearly a year, and in July 1983 the Group produced a 38 page report for the Board of Trustees proving that Vermont State College libraries were weak when compared to ACRL (Association of College and Research Libraries) standards. (Dennis Lindberg, Vermont State Colleges Library Assessment Report, Waterbury, VT., 1983).  The  next step was for the Chancellor to appoint a system-wide Task Force on Library Development in the Fall of 1983 to address the following recommendations:

There should be parity between on-campus and off-campus

Programs in requirements for and use of library/information
Resources;

The system will have a single, joint on-line catalog as one node in a network also including the University of Vermont, Middlebury College and the State Department of Libraries;

Increased reference services will include reference librarians
for the Community College of Vermont (CCV);

There will be a five year coordinated collection catch-up program to add 15,000 volumes per year to system holdings, including small reference collections for CCV site offices.

Costs were projected to be $2.6 million in one-time (capital) funds, and increments to the annual operating budget to total $561 thousand.

Four years later, Community College was able to offer an unusual variety of library services to its patrons.  Twelve site reference collections were begun in the spring of 1985, and further developed during the following year bringing the volume total to approximately 7,000 in 1987.   These collections were never designed to be mini-libraries to fill all the research needs of students.  Instead, they were laboratories for learning library/research skills. (Eileen Chalfoun, “Off Campus Library Services Community College of Vermont,” The Off-Campus Library Services Conference Proceedings, Reno, Nevada, 1986:61).  Classes in research and writing skills were held in these reference library spaces.  “I saw a student sitting cross-legged on the floor of the resource room studying and thought ‘a real college.’  (Pres. Barbara Murphy, nd) Internally, CCV created small resource rooms in each site with basic reference collections, part-time resource librarians, bibliographic instruction (now called information literacy skills), and soon after computers to access information to SCOLAR (database of College resources.)

Direct reference service was provided to students scattered around the state by means of a WATS line into the office of its library coordinator.  No fees were charged to students for this service.  Telefacsmile transmission of information from seven site offices to four state college campus libraries was also provided.

IRIS (Instructional Resource and Information System) was a computer program designed to assist the College’s instructors in sharing successful and exciting teaching techniques, classroom materials, exercise, books, videos, films, filmstrips, journal articles, bibliographies, and guest speakers.  Each site office library was equipped with a microcomputer, printer and software to enable instructors to access at their convenience.

Of special interest was the bibliographic instruction manual, Biblio-Tech, planned and written by CCV staff in 1985 especially for students in a non-campus setting.  The book covered topics such as retrieving and using information, helpful hints for conducting research, information search strategies, computers in the library, research terminology, and library research facilities.  The book was addressed to students, and allowed them to follow the steps to doing careful research without the strict guidance of an instructor.  In retrospect the strategies introduced the skills now described by ACRL as Information Literacy Standards.

During the academic year orientations and workshops were held to explain the College’s library system.  Specific courses in research and writing were listed in the college catalog, and arranged for students.  Staff development days were held on a yearly basis.  Site Coordinators worked with instructors to incorporate research objectives into course descriptions, and panned formal library instruction periods for students each semester.  Information literacy standards remained as the largest goal in library planning, and the staff continued to experiment with ways of providing information electronically without sacrificing  the value of close human interaction, and the serendipity of traditional library browsing.

In December of 1986 Vermont’s governor, Madeleine M. Kunin, officially cut the computer ribbon which activated the state’s Automated Library System.  This momentous occasion marked a milestone in the joint planning efforts of the Vermont Department of Libraries, VermontStateColleges, MiddleburyCollege, and the University ofj Vermont to bring the on-line catalog and automated circulation to the citizens of the state of Vermont.  The governor noted that the “machine age has [sic] begun in earnest.” (“Governor Cuts Ribbon On Computer,” Department of Libraries News, 1987:1).  The truth of the matter is that the College could not have come very far without a little help from friends.

In an attempt to improve cooperation among the Vermont State Colleges, CCV’s Library Director served as Interim Library Director of Vermont Technical College. A plan was developed to create a central library in Randolph with a Central Librarian to provide service to CCV students around the state.  A well written plan with assessment, goals and intended outcomes was presented to the presidents of CCV and VTC, and tabled for a number of years until implementation became feasible. (1994)

Your droll humor and style
Are a fact plain to see;
You make it fun working;
Filing cards at CCV.
I’m sure you can’t guess
Who wrote this corny rhyme.
(HINT:  I’m in the Resource Room
Having a great time!)
So keep those cards and books coming
And the C.O. at bay
And have a fantastic Valentine’s Day!

Anonymous (to this day!)

And this is why CCV is dear to so many, in times of both fire and ice.