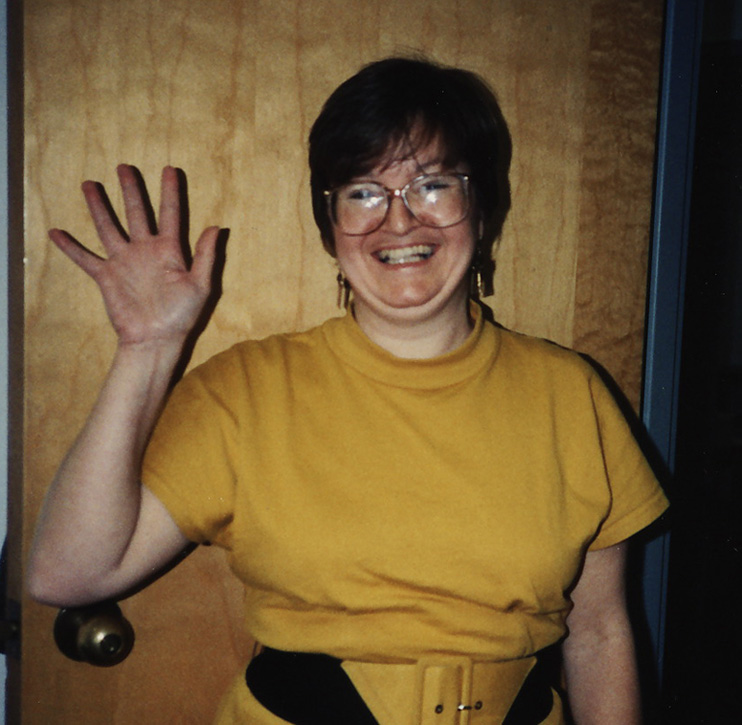 In 1984 I was out of work and just happened to see a help wanted ad in the Burlington Free Press for someone to teach English Comp; as it turned out, it was one of the first two classes ever offered in the Middlebury area. Carol Eckels taught math, and I taught English Comp—with 12 students in a small room at the Parent-Child Center in downtown Middlebury. From there Michael Sawdey, the regional director, asked me to visit local high schools to talk about CCV, and I did some of that work as well.

In the summer CCV was awarded a big federal grant, part of which was to open a site in Middlebury. Pixley Hill, Barbara Murphy and Michael Sawdey interviewed me for the coordinator of instruction and advisement position, and I was officially hired as the CIA in Middlebury on my 37th birthday in October of 1984. Our plan was to be ready to go for Spring 1985. We had no office, no textbooks, no schedule, no instructors, nothing. But by Spring we had 167 course placements, 27 classes, and an office in the historic Battell Block (where CCV is still housed). Because Middlebury has so many highly-educated citizens, it was easy to find instructors—many of whom believed fiercely in what we were doing.

CCV was less than 15 years old at that time; we used to say it was in its ‘institutional infancy,’ but that was a gift for many of us. The college was wide open with opportunity. If you were eager and willing to try something, there was room for you to grow. The tolerance for mistakes was high. There was a ‘missionary zeal’ to the work, and staff and instructors worked extraordinarily long hours because they believed in the mission of CCV. We were paying instructors about $385 per course, and my first contract as a 10-month employee was for about $12,000.

In the summer of 1986 Ken Kalb, the president, and Tim Donovan, the regional director, asked me to go to Rutland for two years to resuscitate that site. Rutland was down to about 70 students; the office was in the basement of the old city jail, and the whole site was on its last legs. I’ll never forget that I asked Ken Kalb what would happen if I couldn’t resuscitate the site, and he was, as always, forthright—that I’d be job hunting! This was a tough job, and Rutland was a tough nut to crack. But after two years our enrollment had tripled, and we were on the verge of moving into the old Howe Scale building.

In the summer of 1988 David Buchdahl, who had been the western regional director for two years, took another position at CCV, and Tim and Ken asked me to take on the regional director’s role for six sites—Morrisville, St. Albans, South Burlington, Middlebury, Rutland and Bennington. I drove every day up and down the western part of Vermont. As CCV was maturing from its infancy to its adolescence, sites kept moving around to accommodate their growth. In one year I oversaw moves in Burlington, Rutland, Bennington and Morrisville. In Morrisville the owner of the hardware store where we were moving into adjacent space ‘signed’ a ten year lease with renovations with a handshake—he was a wonderful landlord for CCV, a person whose values aligned perfectly with the work of CCV.

Because CCV was so ‘new’ and operated in such unorthodox ways, we were always proving ourselves. At that time, the other VSC colleges were not required to accept CCV credits, and that was always a challenge. (Much of this challenge dissipated when Judith Ramaley became president of UVM and insisted that UVM accept CCV credits.) We had many of the hallmarks of a ‘fly by night’ college—no fulltime faculty, constant moves from one space to another, a student enrollment that was unpredictable, very little marketing money. There was always the desire to prove ourselves but not at the expense of the creativity and imagination that made CCV work. I remember, for example, when the South Burlington site reached the 1000 course placement mark! It was simply amazing that in about five years CCV had grown so much.

In 1990 I volunteered to become the Equity Officer for CCV, in addition to remaining as the regional director. I also chaired a policy task force that met for two years to review and revise every administrative and academic policy at CCV. This is an example of the freedom of the college—I learned so much from these two responsibilities that served me well in the rest of my career. Most colleges put you in a position that is nothing more than a box of responsibilities, and your ability to navigate up, down and around is severely limited, but this was never true at CCV.

I’m giving you a timeline here, but it doesn’t really get at the heart of my enthusiasm for CCV. I loved the people who worked and taught at CCV. I loved the way we worked together. The spirit and the mood of the college were so pervasive, so personal, so aspirational that you wanted to do your best work. The idealism of Peter Smith, the founding president, set the course, but there were so many more folks who believed in his vision and carried forth his dream. Ken Kalb was a master at setting tone, and this was before email, so we had to rely on snail mail, occasional all-staff meetings, and a ton of driving around the state.

For example, I hired Mike Kolesnik in 1985 to teach an evening computer course in Rochester at the high school. He got there one night and realized that the building was locked up tight, so he crawled through a window, opened the front door and taught the class anyway. When we needed a coordinator in Rutland, who better than an instructor who was willing to crawl through a window to teach!

One of my saddest memories of CCV is the death of Nancy Winfield, the head coordinator of the Burlington site. Nancy was one of the kindest people I ever met; she used to see problems and solutions as ‘a piece of the puzzle.’ Her death shook the Burlington site to the core. I went to see her the week before she died, and she told me then that she would do anything to be back at CCV—she was a good woman doing good work, and she has been an inspiration to me for 20 years.

When Barbara Murphy became president, CCV really was moving into its adolescence. CCV felt more settled, not less energetic, but many of its earlier challenges had been resolved. Barbara brought her own professional maturity, her CCV experience and her wisdom to the presidency, and CCV was the better for it. Barbara asked me to take on CCV’s advancement functions, including alumni affairs, marketing, publications, and fundraising, and by 1998 I was the dean of advancement although I still oversaw three CCV sites. With Barbara and Tim’s encouragement, I began looking at community college presidencies for myself, and by 2000 I accepted the presidency of a small rural Colorado college on the high plains, a dust bowl college called Lamar Community College.

On the day that I needed to make a decision about whether or not to leave CCV, Peter Smith was the keynote speaker at convocation. Peter used to introduce himself as the man who had a great future behind him as he was always very proud of founding CCV. That day he was as inspirational as he has always been, and I despaired at the thought of leaving a college I loved as much as I loved CCV, but I was ready to move on.

I confess that in my two presidencies I always wanted to duplicate the climate, energy and passion of CCV. I knew not having enough money, not having enough faculty or staff, not having the best or latest of everything—those were not excuses for not building a climate of respect. I knew that excellence was possible because I had lived it for 16 years. That was the lesson of CCV, and I am forever grateful for having learned it.